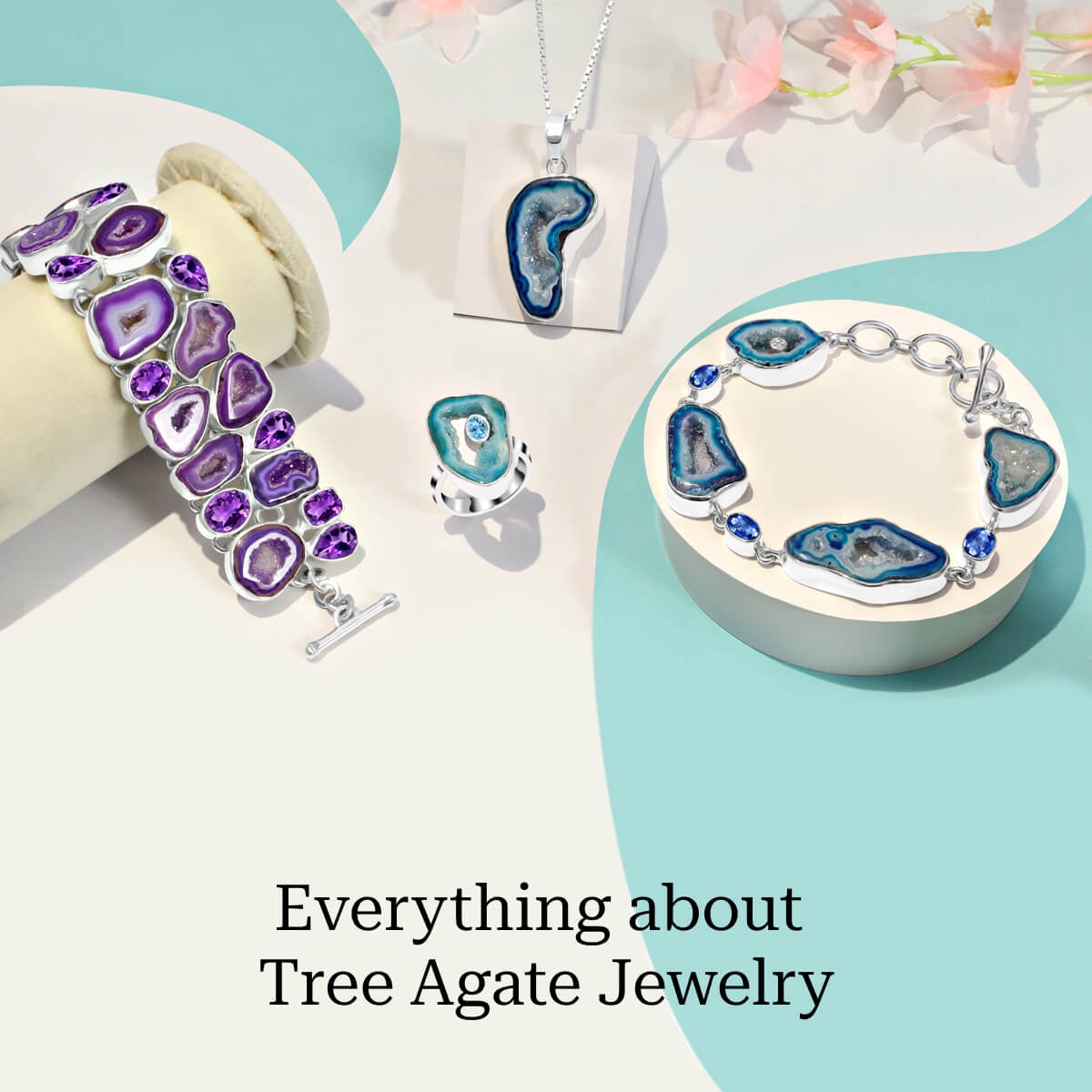 Tree agate is gem that has a white surface with green spots or patches on it. Tree agate is also referred to as dendritic agate. These crystals include inclusions that resemble foliage or tree branches, giving them a lovely and distinctive appearance. This gemstone, which appears white and green, is frequently referred to as the stone of pentitude and is thought to have a strong bond with nature. In order to encourage a bountiful harvest, tree agate was buried in agricultural fields. The ancient Greeks associated this stone with dryads.

The birthstone for the months of August and September is tree agate. When it comes to astrological signs, tree agate is related to the virgo sign. People having this sign are typically recommended to take tree agate with them. The most suitable way to carry a gemstone with you is in form of Gemstone Jewelry which will stay in contact to your skin and thus work effectively. Wearing Agate Jewelry will enhance your success, wealth, and health. Indians have used tree agate in form of talismans. Tree agate is regarded as the stone of serenity. Agates are typically connected with volcanic rocks since they can be found in a variety of host rocks. Additionally, they are also found in a few metamorphic rocks.

The Greek term that inspired the word "tree agate" means "tree-like." This name was coined by Theophrastus. These are found in Uruguay, Brazil, and India. Iron and manganese minerals can be seen as inclusions in tree agate. While tree agate is seen to be white, it can also be grey or colourless. This stunning Gemstone can be worn as exquisite Agate Jewelry that comprises of Agate Ring, Agate Earrings, Agate Necklace and Agate Bracelets. It is said that the energies of tree agate and moss agate are similar. Tree agate is a nature's stone and wearing Agate Jewelry would bring you close to the beauty of nature and it's mystical and magical insights. It is an excellent stone to use for grounding exercises and to keep you grounded. You might protect yourself from bad and negative energy by wearing tree Agate Jewelry, which would also assist you in accepting the essence of who you are.

Wearing Tree Agate Jewelry will help you in building the divine and eternal connection with the nature. Unquestionably, nature is magnificent. Once you are connected to the natural world, you may benefit from its magical healing energies. The sound of birds tweeting and the wind brushing across the trees may make you feel happy and comfortable. Those who struggle with self-expression you should definitely wear Agate Jewelry It is excellent for use as a meditation stone. You will be inspired to repair your inner child and experience inner serenity and joy if you wear this Gemstone Jewelry. You will appreciate your present more if you are less stressed in general. The energies of Tree Agate are certain to bring contentment and serenity in your life. 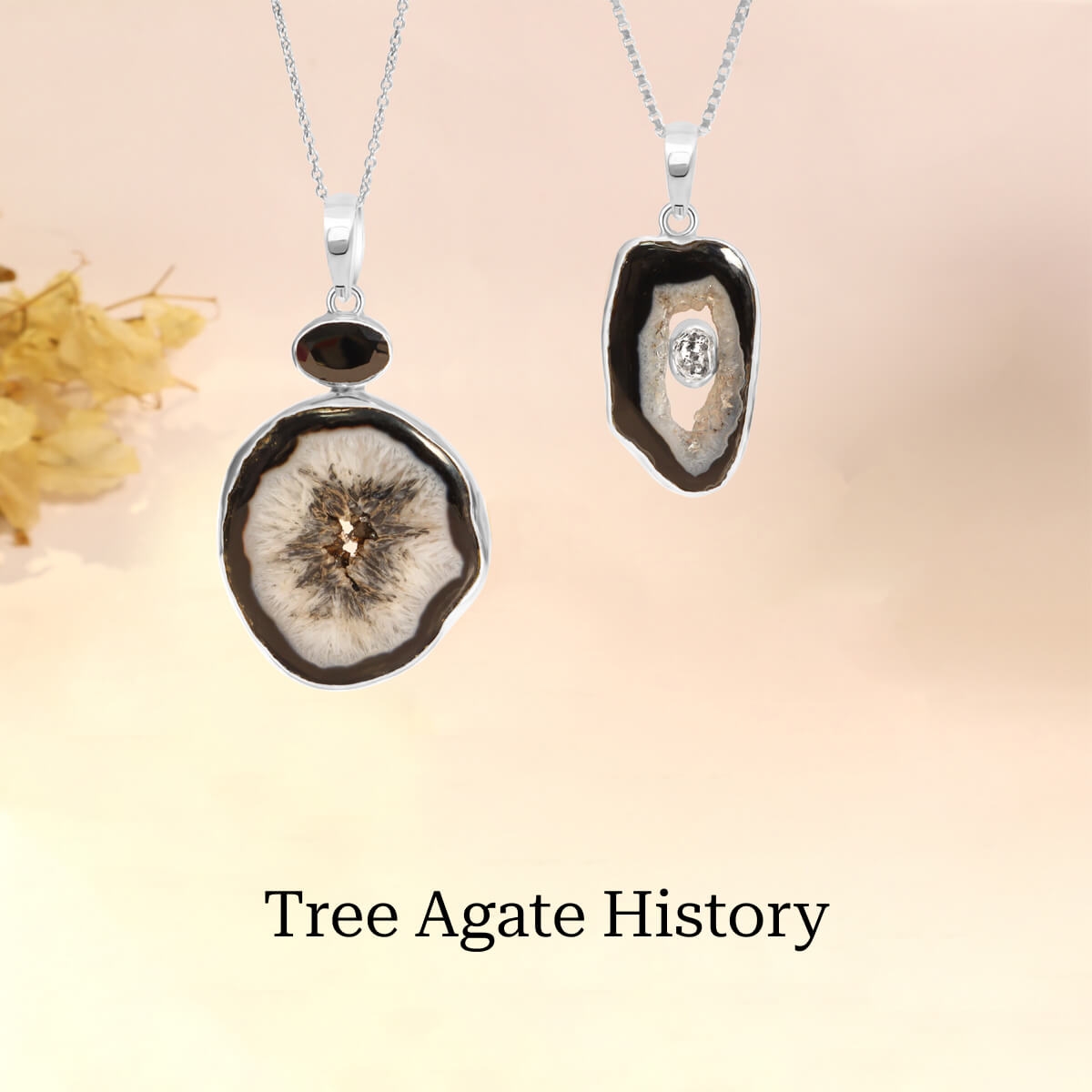 The history of agate is extensive. The Egyptians used agate extensively to create agate rings and seals three thousand years ago. It was believed that the agate was found were found in the Achates River which is in Sicily. Agate was used by the inhabitants of India, Greece, and Egypt also as talismans in ancient times in addition to being used for its beauty. Agate is one of the oldest healing stone thus wearing Agate Jewelry has its ample benefits. Agates have been valued and treasured since the very beginning of time, as abundant archaeological evidence demonstrates.

Agate-carved seals, Agate Rings, beads, and other ornaments were mentioned by early lapidaries as early as 3000 BCE. Agates have been discovered in numerous Stone Age tombs, and it appears that people retained them for their beauty or perhaps their energising properties. The earliest people to write about the power of stones were the Sumerians, and they claimed that wearing agate earned one particular favour with the gods. Greek author Theophrastus is credited with coining the term "agate" initially. In his writings, he claimed that the Achates River in Sicily was the source of all agates. Today, agates can still be found along this river. Ancient peoples valued Agate Jewelry just as much as people now do.

Theophrastus' words were further expanded upon by Pliny the Elder. He asserted that agate was an alluring stone that would draw the viewer's attention to it. He added that anyone's push would be quenched by this stone. Wearing this Gemstone Jewelry is still seen as being very helpful for eye-related issues. These assertions were made by Pliny the Elder in the first century. Though many individuals today concur with these assertions. The same stone is found in varieties known as dendritic agate, moss agate, and tree agate. While the dendrites in Dendritic Agate often have black or brown tones, different colours are also possible, Moss Agate and Tree Agate feature green dendrites. Though all of them give gorgeous Agate Jewelry and are often seen in form of gorgeous Agate Ring, Sterling Agate Earrings, chunky Agate Necklace and dazzling Agate Bracelets.

Properties and Benefits of Tree Agate 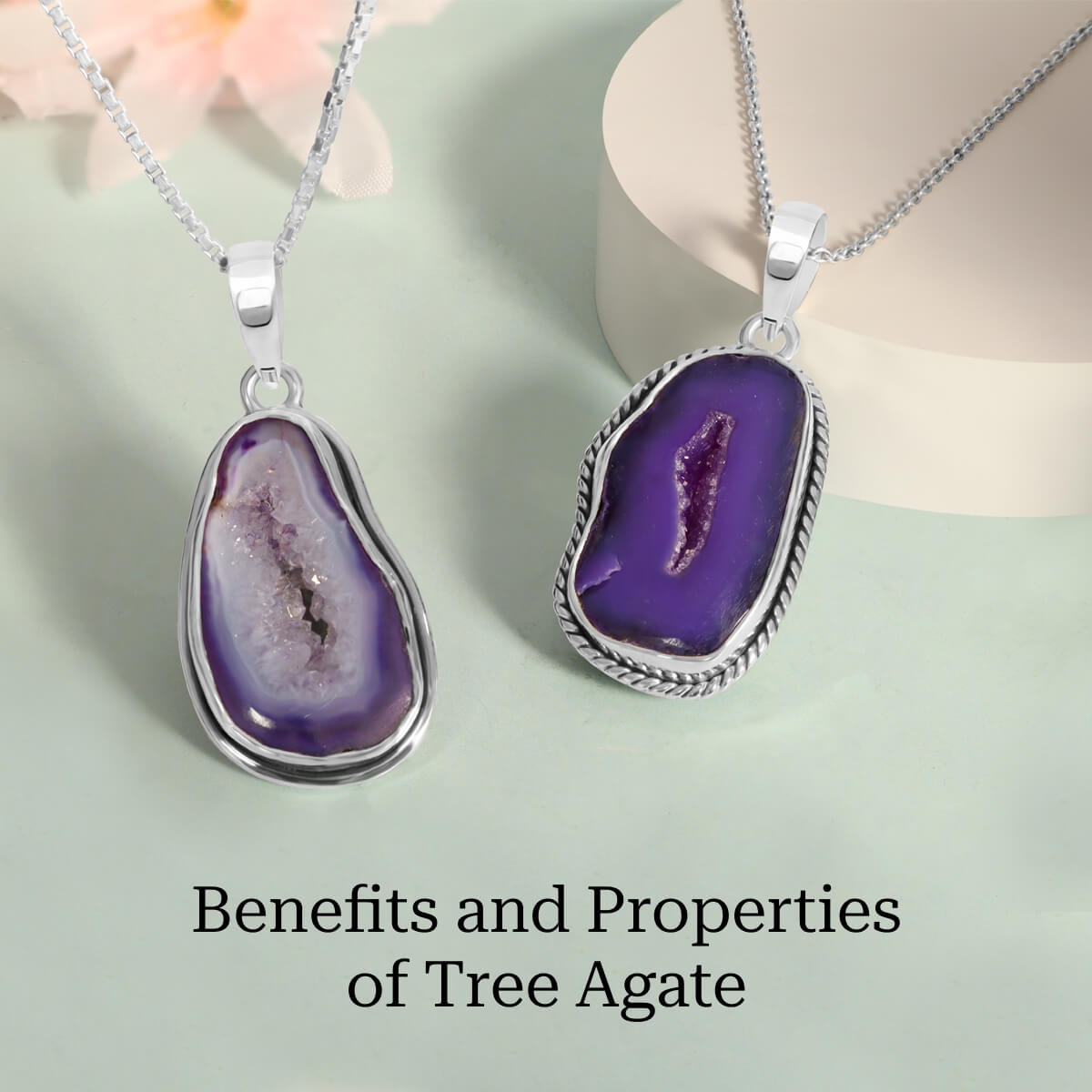 Tree agate is a noteworthy stone due to its beauty and originality. This stone exhibits distinct variation as well as a wealth of qualities that make it an intriguing gemstone. Agate contains inclusions because it contains iron and manganese oxides. It is thought that these inclusions make their way into the white quartz fissures where they give rise to agate. Tree agate is a relatively hard stone with a hardness range of 6 to 7. Agate Jewelry is needed to take care of and kept separately. Because tree agate and moss agate are thought to have similar energies, they are frequently mistaken for one another. Although moss agate and tree agate contains different minerals. Although they may look different but they are all variations if the same stone.

The dendritic agates exhibit hues of brown or black, but the dendrites of moss agate and tree agate are both green. With vivid green inclusions on a placid white surface, the tree agate has a stunning appearance. Making the Agate Jewelry a gorgeous Gemstone Jewelry which is a must have. Your life will become more peaceful and pleasant as a result of this stone. It is a stone that will improve your mental, emotional, and spiritual well-being. Wearing this Gemstone Jewelry may bring warmth in your life. While Agate Earrings, Agate Necklaces, and Agate Bracelets are still quite popular today, agate rings have been prized since antiquity and all of these have special importance.

Tree agate with its nature green and placid white shades is believed to be associated to the heart chakra. This stone is thought to strengthen your immune system, and because it is the nurturing stone, it is excellent for balancing the amount of water in your body. This stone is excellent for relationships in addition to having healing and protective properties. Your relationships will experience an easy flow of love if you wear Agate Jewelry. Harmony is brought into the wearer's life when wearing this Gemstone Jewelry. This stone encourages mental calmness and aids in having a tranquil perspective and an upbeat outlook on life. A person who wears Agate Jewelry is encouraged to engage in self-analysis.

Agate Jewelry is recommended for people with high blood pressure since it will help to balance the blood pressure. This stone is excellent for increasing immunity. It is a stone symbolising tranquilly and peace. You will feel strong and capable if you wear Agate Jewelry. It is a stone that aids in entering a deep state of meditation. This stone will connect you to nature and distance you from the chaos of life. Those who struggle from egoism should wear Agate Jewelry.

You can obtain stability and equilibrium in every area of your life with its assistance. This stone has a calm vibration that will encourage you to strive and dismiss anything that is making you uncomfortable or confused.

The areas of business are also said to benefit from the use of this stone. Your life would be successful and prosperous if you owned a tree agate. Wearing Agate Jewelry prove extremely beneficial for those relating to business. Tree-Agate is very helpful for accomplishing your goals because it will motivate you to do so. It is a fantastic stone for your mental health and will help you to be more clear-headed. Relations can be strengthened with the help of tree agate. Tree-Agate will offer expert assistance in a professional context. Your vibes will be balanced as a result, making you always delightful to be with. Additionally, it will make sure that you are constantly encouraged, respected, and appreciated.

The stone of nature, tree agate, provides a variety of advantages. The fascinating properties and beauty of tree agate make it a very alluring stone. You would feel more connected to the world around you if you wore tree Agate Jewelry. The energy obstructions that are obstructing the free passage of forces will be removed by this stone. It will support a tranquil environment around you. With so many advantages, tree agate is an absolute necessity. At Rananjay Exports, you may purchase a stunning piece of tree Agate Jewelry at wholesale prices. You may get gorgeous Wholesale Gemstone Jewelry at Rananjay Exports that is of the highest quality and comes in a variety of designs.