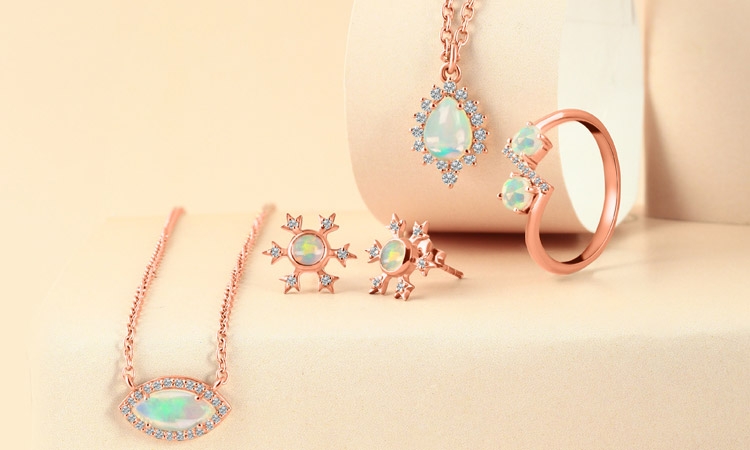 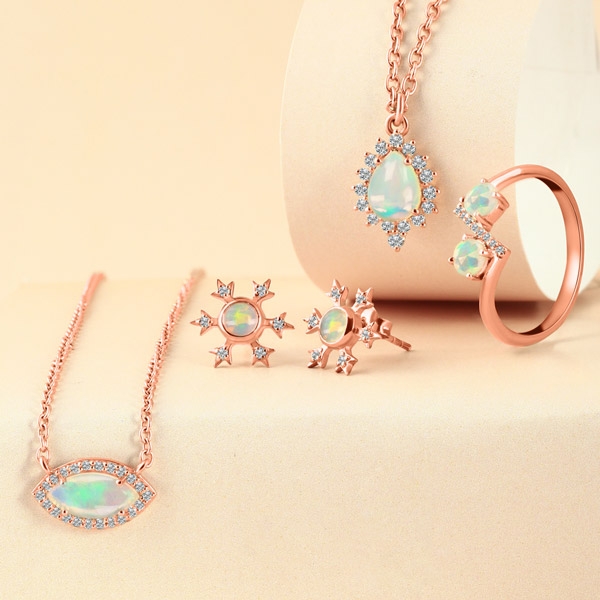 Those of you who are born in October are quite lucky; you are blessed with not one but two birthstones, Opal and tourmaline, that holds the beautiful colors of the rainbow and endless color combinations, giving out radiance to the wearer making them talk of the town.

In this article, we will talk about our traditional October birthstone opal because nothing can be compared with this old relic. Opal has long been recognized as an artist's muse, and the love of ancient and showers the kaleidoscopic play of colors to steal the breath away from the one who looks at them. In addition, they are known to bring forward the October babies' hidden capabilities, showering them with hope and confidence and further giving out substance to shine bright in the world. 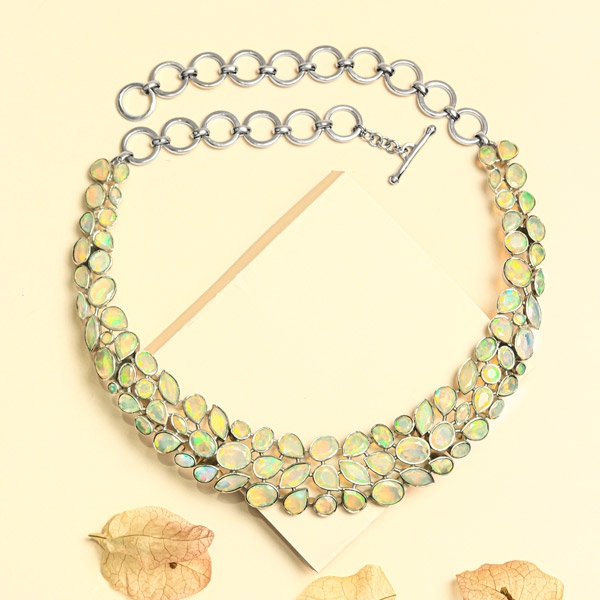 The October birthstone opal is a mineraloid that took millions of years before getting its shape. The constant heating of the silica and flow of the water through the cracks lead to its formation, giving wonderful Opal to the world. It comes in two different varieties, precious and common, which are determined by the play of colors in the light.

They used to be quite rare, but after discovering the rich mines in Australia, they become pretty accessible to the modern markets. Today, they have a wide availability in Ethiopia, United States, Mexico, and Brazil.

The discovery of the word Opal is still a mystery to the world as there have been multiple names giving out different meanings to the stone. While some agree that the word Opal has derived from the Latin word 'opalus' meaning precious recorded last in 250 bc, some assumptions still giving out a conflicted approach. While others believed that it took its roots from the ancient Greeks' opallios', translating it into the word to "see a change in the colors." Later in some other findings, it stated that the word was actually derived from a Sanskrit word Upala meaning the precious stone with the much likely meaning.

Due to its captivating display, Opals has been given the tag of queens of gemstone and is believed to carry the different virtues that will further highlight it in the gem world.

When it comes to the symbolism, these gemstones are surrounded by various amusing stories but traditionally associated with faithfulness, loyalty, purity, and trust, giving out splendor to the one who wears them. It is believed they are inculcated with some beneficial healing, which we will discuss later in the article. 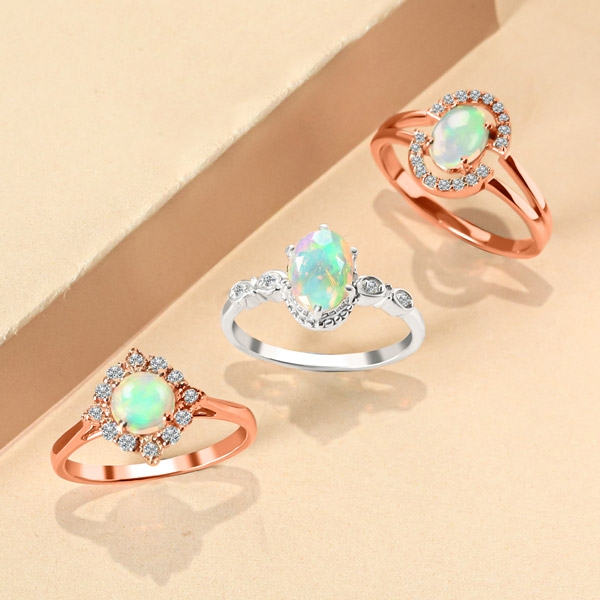 The October birthstone opal has a multicolor nature. It comes in a wide variety of shades such as white, grey, brown, black, blue, which jubilates the characteristics of the gem, making them have an exciting look. But along with these colorful hues, the prismatic play and the interaction of spectrum colors gave the stone its identity.

An intriguing component about these gems is the spectrum flashes and interactions, which are called the play of colors Giving the base element to the precious and common Opal. If the stone carries a broad spectrum of colors with rich iridescence in the light, they are referred to as precious, while the gem with very little or no play is called common.

These gems have the base color and a translucent to opaque look ranging from the deep forest black all the way to the milky white, but all this depends on the specific locations that they are being found. The most popular among all Opal are black Opal which comes from the town of lightning ridge in Australia. They have a black to dark blue appearance with opaque that accentuates the wild play of colors and brings a somber and distinguished look to the October birthstone opal.

Naturally, Australia is not the only place with the highly prized Opal in the much deeper scenario. Ethiopia is the next growing market and is the home of a wide variety of Opal that comes with a strikingly color range of body hues like the white, blue, pink, and colorless variant with more reds, making the beautiful peices of October Birthstone Jewelry. 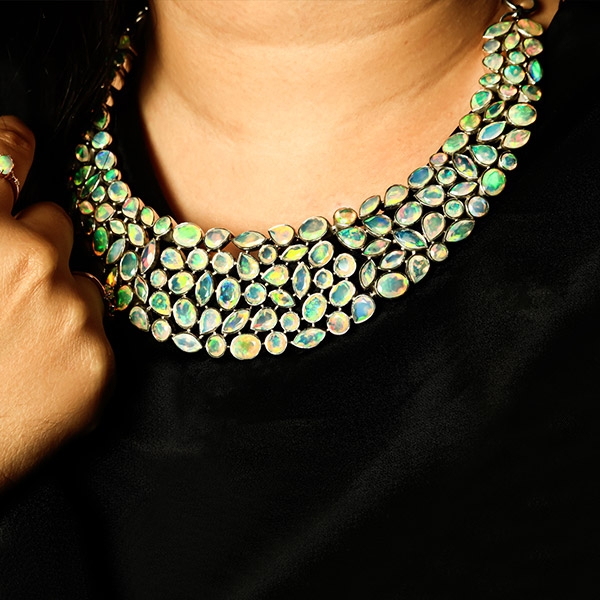 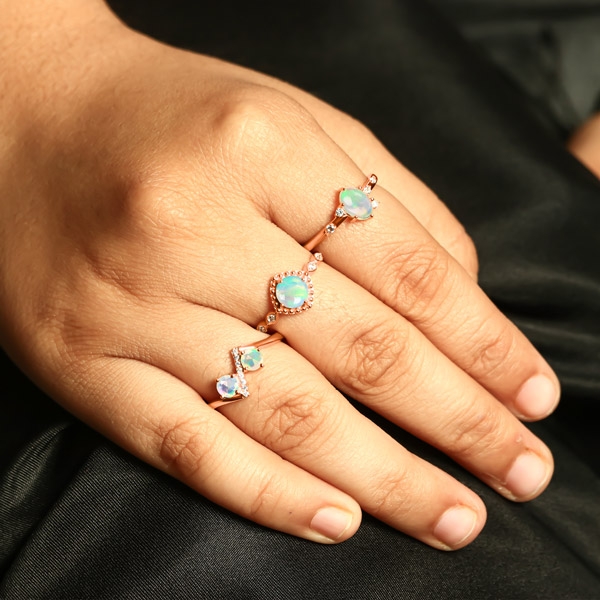 Opals are delicate stones ranging from 5.5 to 6.5 on moh's hardness scale. They look all pretty and alluring when set in sterling silver, giving the wearer's absolute shine. Taking care of such jewelry pieces is a must affair. Since this gemstone is made of spectrum patterns created by the refractions, minor scratches or slight graze can highly affect the gem's beauty, leaving you deterred.

They carry a high water content that goes up to 20 to 30%, making them evident to get damaged with the sudden rise in heat or temperature. Even a slight change from cool to hot temperatures leads the stone to dry up and break. So before getting the stone to such bearings, it is necessary to keep it well soaked or simply putting your opal jewelry in a wet cloth.

Opals have a porous nature and soak up liquid; cleaning with the detergent and the harmful chemicals can damage the pieces of opal birthstone jewelry. In order to ensure the shine of the opals, cleaning them with a mix of warm water and soap is likely to be the best approach. Try to keep the process short; keeping the stone in water for a more extended period will weaken the binding matter and seriously detorite the stone and its shine. 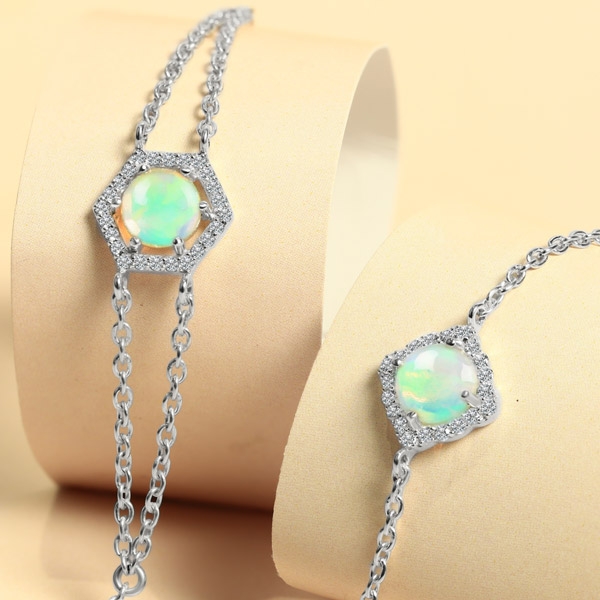 For a long time, believed to bring good luck, opals are the bringer of new energies; the Opal Birthstone Rings wrap perfectly around the finger and are one of the cherished items worldwide. In the European nobility, Opal was related to the pure bliss in a gem and still manages to catch some eyes in modern times.

If you want to add these opals to your wardrobe or plan to gift them to your loved ones, you can explore Rananjay exports. We are the Wholesale Gemstone Jewelry supplier based in India. We have a wide variety of opal jewelry sourced from Ethiopia, which has the color and flashes that bring forward the gemstone charm.

If you have any queries, feel free to contact us. 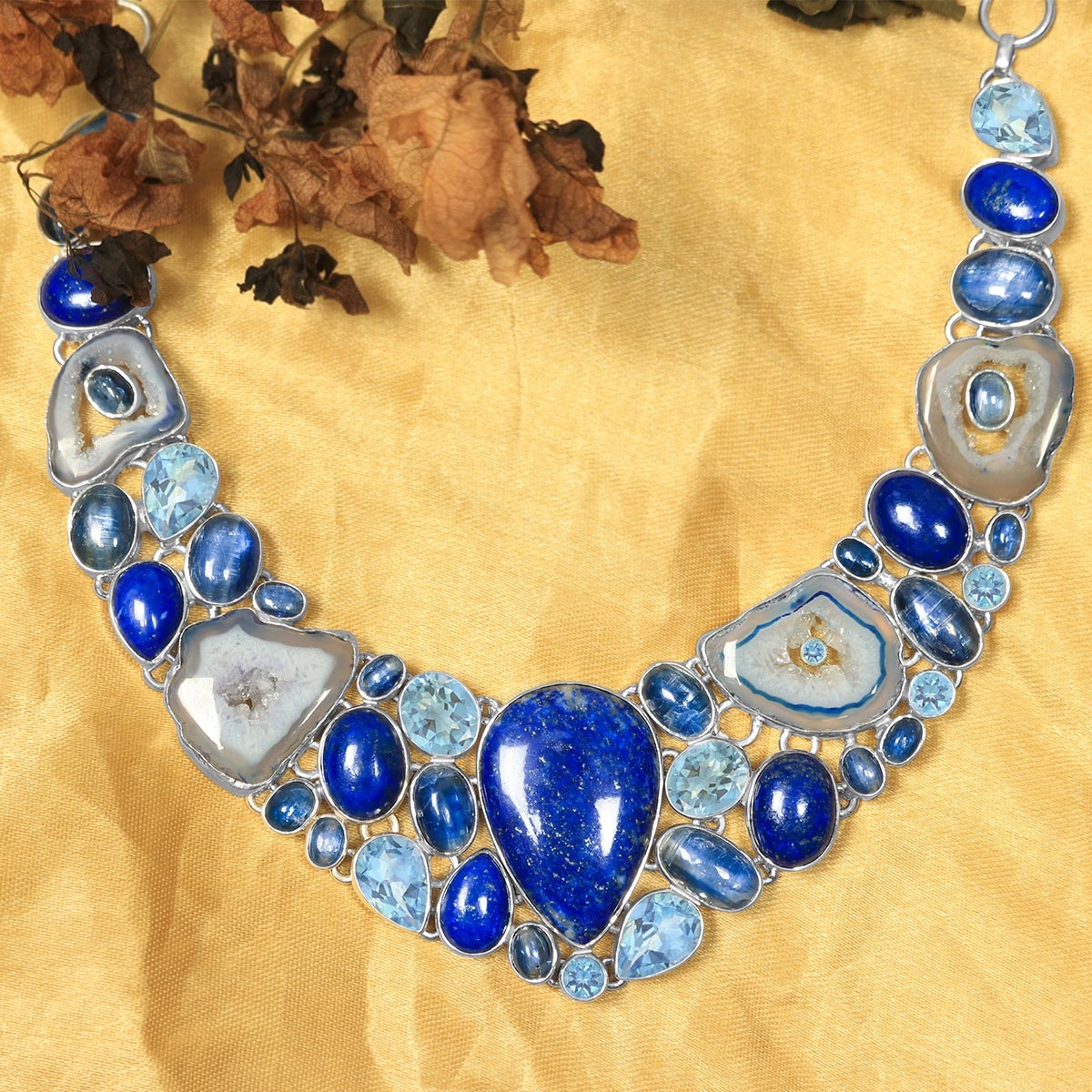 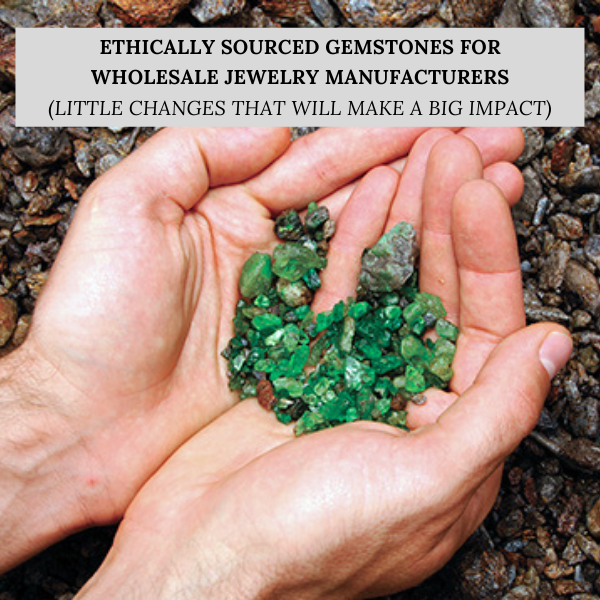 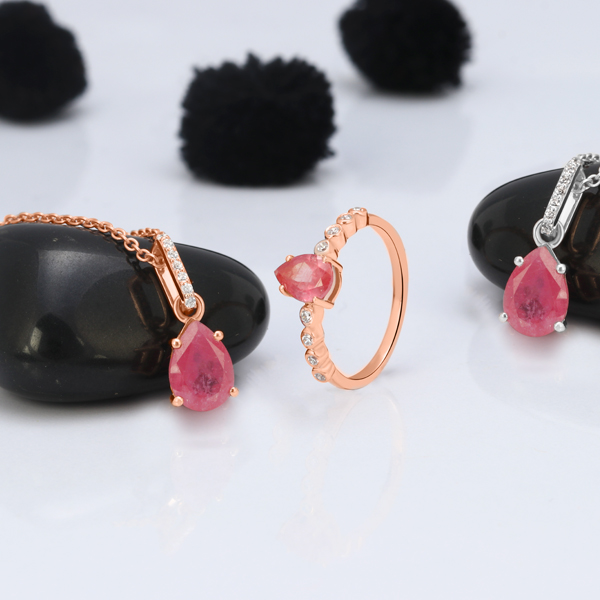